They say first impressions are lasting impressions; such was the case when I became involved as the Program Director of Camp Shalom.  When my family and I came to Camp Shalom, it was after serving for 6 summers at a camp in Kentucky.  We had finished out our summer there and moved to Cambridge.  Because of the way the school year is organized in the two places there were still a couple of weeks of camp left at Shalom which I got to observe.

I was excited to see another camp “in action” and knew it would help me to be better prepared to lead the coming summer.  It was at this time that many lasting impressions and a great appreciation for Camp Shalom began.  In those first days talking with summer staff, I was struck by the depth of faith and how it was infused throughout the camp program.  I remember chatting with the summer program director and her sharing a concern for one of her campers and the need for prayer.  The depth of her concern impressed me, especially as I knew this was one of her last weeks of camp and staff can often get worn out by that time and involvement can wane.  I sensed none of that in her.

That initial impression was further solidified as I attended my first Power & Praise time.  The care that was put into the planning of songs, skits and message was good, really good.  Best of all, the campers got right into the songs and listened more attentively than I expected for 4th to 6th grade kids cooped up in a hot building at the end of August. I felt privileged that I would get to be a part of this in a much deeper way the coming summer. 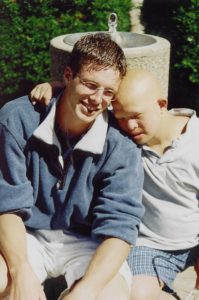 In following summers, one of my greatest joys at camp was the worship, especially with Special Support camps.  Many times campers would join the summer staff as they were leading worship, and that never fazed them.  In fact, they enjoyed their participation as it glorified God.  One of my favorites was a camper we nicknamed Wild Bill (more on Bill below).  For several summers he came to camp with his own guitar.  Bill’s guitar was missing a few strings, and the neck was broken, but he would bring it to worship and play with the summer staff.

I was impressed then, and still am, with the people who made the summer program a God glorifying experience that was fun and led to growth in faith for both campers and staff.

Do You Remember When?

Paul says in Philippians 1:3, “I thank my God in all my remembrance of you, 4 always in every prayer of mine for you all making my prayer with joy.”

As I think back to the many experiences I had with campers and staff at Camp Shalom, I thank God for you all.   You are a cherished part of my life.  When I get the opportunity to reminisce with friends from that time of my life, many times in the conversation you will hear these words, “Do you remember when…” which leads to some silly, some serious, but always fond memories.

Do you remember in staff training when we were just getting to know each other in those first days?  We had been sharing a bit about ourselves, and I had shared how I came to Camp Shalom from the USA.  One person came in late to this part of orientation after my sharing time.  When it was her turn to share, she explained that she was late because of a concert she attended.  She began complaining about how people were acting like “stupid Americans!”  I was amused to see other staff trying to cut her off, knowing where I grew up.  She was rather embarrassed, but we laughed it off, because I knew it wasn’t personal.  It was my first personal introduction to how people can feel about the US.  By the time we left, I felt honored to be considered “one of us” i.e. “Canadian.”

Do you remember the day I broke my arm at camp?  It was a Thursday night at the boys all camp pillow fight.  Yes, I did just say it was at a pillow fight.

As it happened, the pillow fight was generally a reward for good behavior during the previous part of the week and the epic scale of the fight out on the lawn I am sure has made for many other memories at camp.  This particular week, I wasn’t so sure the guys deserved to have the fight.  So I decided to attend, and planned that if any camper started crying or complaining they were hurt, the pillow fight would be over.

I learned 3 things that night:

I was getting hit on the legs a few times so I decided I would jump the pillow to avoid the next blow.  Well, the pillow hooked my sandals and flipped me backwards.  I reached behind me to break my fall, and heard a snap.  I got up, looked at my arm and knew I had broken my wrist.  Holding it as gently as I could, I called a halt to the pillow fight, directing the campers to go to their cabins and get ready for bed.  With that accomplished, I turned to the other matter “at hand,” my wrist.  It was time to go to the hospital, but there was another catch, my wife was not at home.  In fact, she wasn’t even in the country.  She had gone to a conference.  I had to have a couple of the lifeguards take me to the ER that night.  The ER is a whole different story, for another time.

Do you remember the special support camper “Wild Bill” and his guitar?  We had nicknamed one of our campers “Wild Bill” and he came to camp every year with his guitar.  Bill would take it to Power & Praise and even though it didn’t have all the strings and the neck was broken, he would “play” with the summer staff as they led worship.  It was a joy to watch the joy on his face as he played along.  The thought has occurred to me over the years as I reflect back on that experience, that our worship may sound a bit like Bill’s to God.  I’m sure our singing does not compare to that of the angel choirs. But, just as it was a delight to observe Bill worshipping with all his abilities for God’s glory, God probably has the same delight as he receives our worship.  It doesn’t have to be beautiful musically or in any other way, but I’m sure He finds joy in a heart attuned to Him in worship.

It brings back so many fond memories of Camp Shalom when I start to play, “Do you remember?”  Similar memories of fun, growing in faith, building deep relationships with friends, amazing times of worship, get made every year at camp.  If you haven’t sent your child to camp, I would encourage you to do so.  It is truly a life changing experience.  I know it has been for me.

Oh… hey, do you remember?