Now it’s time for my kids to experience Camp Shalom!

Wow. What a privilege to be able to tell you 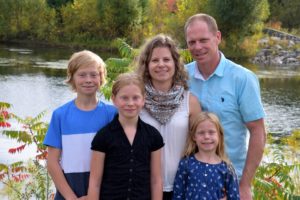 about my experiences at Countryside Camp / Camp Shalom. I have read some of the other posts by alumni and am honoured to be able to join them.

My Camp experience began with the Fall Fair before I was old enough to be a camper. Waiting until the summer I was going into grade 4 was so hard. My Father told me many stories including one of hand carrying buckets of furnace oil up the lane to what became the staff house so that the furnace would keep running.

My first summer as a camper was back in 1983. The tuck shop was a lean-to on the staff house. The boy’s washroom at the end of the change rooms had a dirt floor and the staff were full of life and love for Christ. Love for Christ and showing it in their life is a repeating theme throughout my yearly trips to camp. I have been blessed to watch Camp Shalom grow over the years. The addition of Drost Lodge and the winterized cabins were milestones for camp allowing Munchkin camps and Special Support camps to start and grow. I spent one week a summer coming back, all the way through high school. Some of the stories I could tell you about what we did as campers… Maybe I will leave those for another time. It might not be a good idea have them in writing.

I first joined the staff in the summer of 1992 on Maintenance. Spending the summer cleaning Centre Hall, collecting garbage and cleaning the bathrooms. It gave me a chance to talk and minister with campers in different situations than most of the staff. In 1993 I spent the summer reprising my role in maintenance and helping in the cabins at night when we were short male counsellors. In 1994 and 1995 it was lifeguarding that brought me back to staff and another chance to be a servant.  I was again growing with and leading campers in their walk with Christ.

In all of those summers to be able to spend time with the staff and campers showing them and being shown Christ’s love and example is something that I will never forget. I have watched as campers have become staff and brought their Love for Christ to another generation.

Now it is my kids turn. They started in Munchkins and absolutely love their experience. Muchkins has changed in the 35 years of my camp experience: the buildings, the people but the one thing that hasn’t is the message. Countryside Camp / Camp Shalom has always been about showing God’s love to all who pass through the gate.

By Peter A. DeVries