Camp: Where amazing things happen all the time! 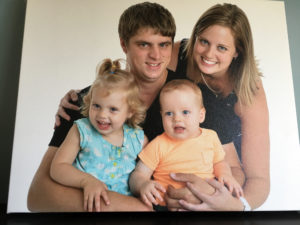 Hi everyone 🙂 For those that don’t me, my name is Mel Van Rootselaar (Bakelaar).
I was on staff from 2006-2008. I was a lifeguard, head lifeguard and Trek Coordinator. I met my husband Josh at camp. We worked there for 6 consecutive years-but never at the same time! We now have 2 kids-Clare and Case who are 3 and 2.

Camp is a wonderful place where amazing things happen all of the time. It could be raining everywhere but when we had something planned, somehow there was a bubble of protection so we could do the activity. Someone could be having a terrible week and then have an amazing moment where someone came to Christ for the first time. I had one of these experiences and it is one of my most favorite stories to tell people. In 2008 when I was the Trek Coordinator, it was our first week out on the river and we only had 4 campers (which meant there were 3 canoes).  My partner had a camper in his canoe, I had one in mine and then there was the third canoe with 2 campers. They were older boys; one was an experienced canoer, the other was not-but I had taught him swimming lessons in previous summers, so I wasn’t worried about them at all.  They had found some fishing line somewhere along the way and had tied it to a stick and were ‘fishing’ behind the canoe. Now I don’t know if any of you are skilled canoers, but the person in the front has a very important job-especially in the Grand River. YOU NEED TO WATCH FOR ROCKS. It’s very simple. However, this is not what they were doing.  They ran into a huge rock and their canoe flipped. They were momentarily pinned underneath before they surfaced. Now the Grand River isn’t very deep at all, so they could stand. Once we grabbed as much of their stuff as we could we all pulled off to the side to regroup.  They had lost their pillows, a pair of shoes and it looked like that was it. We went to get ready to go again and then we realized-they lost something much more important than pillows- their paddles. Both of them. Oh. No.  So we tried to figure out a game plan-6 people. 3 canoes. 4 paddles. But then something caught my eye. Coming UP RIVER (yes up river-against the current) was a canoe; moving at a pretty good pace. We all just stood and stared as we couldn’t believe our eyes. This canoe came up to us in crazy good time to where we were standing at the bank. In the canoe were two men with the longest, blondest dread locks you’ve ever seen. They asked us if we happened to lose 2 paddles….um….yes?! They passed our paddles to us and then continued on their way. Up river. We could not believe what had just happened! Once they were out of sight, I turned to my partner and the campers and said… “Well. I’m pretty sure those were not people”. I will never forget the moment when God provided and sent us angels!!

What Camp Has Meant to Me

Camp Shalom is the most precious place to me on earth. I not only met my husband and best friends there-but I met God there in more real ways then I ever could have imagined. Having the privilege of teaching children about God is the most wonderful thing anyone can do.  At camp I also met people that will forever be in my life. These are the people that can move to Ireland for 4 years, people that can live hours away-people I might not see or talk to for months or years-but will always have a special connection with. To have a community like this can only be fostered by sharing something so deep and so meaningful-we all have the same great love-our love for Jesus.